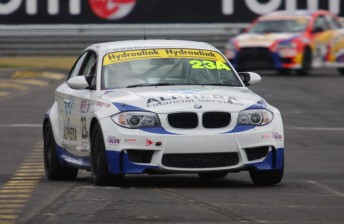 Beric Lynton has pipped Mitsubishi driver Stuart Kostera on the line to take his BMW 1M to a maiden Australian Manufacturers’ Championship race win at Sandown.

Kostera and co-driver Inky Tulloch had led every lap outside of the mid-race pitstop cycle before Lynton stole the win by 0.17s.

The Garry Holt/Ryan McLeod Mitsubishi was almost 15s further adrift in third having fought through from the back of the grid following the duo’s failure to finish yesterday.

The Jim Pollicina/Ryan Simpson and Dylan Thomas driven Evo Xs made it four Lancers in the top five at the end of the 40 laps.

The result was enough to give Kostera the drivers’ title for the third consecutive season, finishing two points ahead of Tulloch due to qualifying points earned earlier in the year.

Mitubishi again took out the AMC title ahead of the combined BMW/Mini pointscore.

Simon Tabinor capped off his title winning season in the Saloon Cars with a clean sweep of the three Sandown races.

Josh Kean and Gavin Ross rounded out the top three in the morning’s Race 2, while Ross and Travis Lindorff followed Tabinor home in the final.

Fittingly, it was three-time title holder Adam Beechey that took out the last ever Commodore Cup round, holding out a determined Tony Bates in Race 3.

Bates – who struggled with gear shift issues in Races 2 and 3 – won the first race earlier in the day, while Beechey drove from the back of the eight car field to win the reverse grid Race 2.

In the Swift Racing Series Allan Jarvis secured his second consecutive title, but only after a post-race penalty for Reece Murphy that relegated the latter from first to third in the Race 3 result, which proved enough to change the final series standings.

Damien Ward had earlier grabbed the attention in Race 2 when he rolled while trying to take the lead from Jarvis at the last corner.