Josh Hunter has taken victory in the 2012 Kumho Tyres V8 Touring Car Series with a clean sweep of the final round at Sandown.

The 17-year-old Sydneysider overcame a stiff challenge from former series winner Tony Evangelou across the weekend, with the veteran leading laps in all three races.

Evangelou made the best of the starts in Sunday morning’s Race 2 to take the early advantage before Hunter slipped by on Lap 5 of 10, taking the win and sealing the title in the process.

A Lap 3 mistake from Hunter allowed Evangelou through in the longer, 15 lap, Race 3, but the Finance Ezi Ford would again sail past at the halfway mark to take the lead for good.

“We had the speed all weekend,” said Hunter. 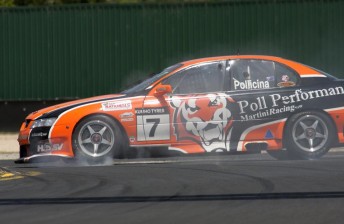 Pollicina ended his season with a spin at Turn 1 on the final lap. He rejoined without losing a place to take third.

“I came here with a strong head and we really wanted to win this championship.

“We had the will to do that and we’re really happy to get the win for the team and to wrap up the championship is awesome.”

Second in all three races ensured Evangelou second for the round ahead of Morgan Haber, Jim Pollicina and Matthew Hansen.

Fourth for the round was good enough to secure second in the series standings behind Hunter, having entered the weekend as the only man with a chance to stop the teenager. Haber, Hansen and Evangelou rounded out the series top five.

The Dunlop Series regular then failed to take the start for the final, pulling into pitlane at the completion of the warm-up lap with further issues.