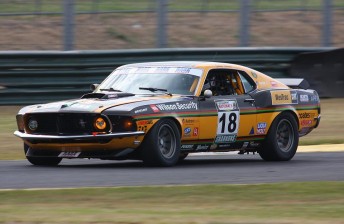 John Bowe has been assured a second straight Touring Car Masters title after a bruising second race at Sandown that claimed the AMC Javelin of rival Jim Richards.

Richards, who had been the only driver to enter the weekend within touching distance of Bowe’s Ford Mustang, crashed out of the weekend in a head-on collision with the Falcon of Tony Karanfilovski.

Karanfilovski had led the early laps of the reverse top 10 grid race but spun at the final corner before being collected by Richards.

The incident brought out the Safety Car, while a later rollover at the fast Turn 6 from XA Falcon driver Chris Collins eventually saw the race end under red flags.

Richards later downplayed the severity of his shunt but confirmed that the damage sustained to his car was extensive. 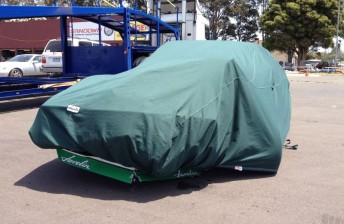 The Richards Javelin sitting forlornly in the paddock following its accident

“It’s buggered,” Richards told Speedcafe.com of the Javelin, which had been called into action following a mechanical failure on his Falcon Sprint during practice.

“It’s not a throwaway but it’ll be a lot of hard work before it hits the track again.”

He added of the incident: “I was the last car in the group and the guys in front could see the car that was there but I was shielded from it.

“I had no idea until the car in front flicked sideways and by that time there was nowhere to go.”

Regular front-runner Andrew Miedecke did not start the race while his crew changed the engine in his Camaro following a failure in Race 1.

Collins’ rollover was the third of the day so far following incidents for Tony Edwards and Damian Ward in earlier TCM and Swift Racing Series encounters respectively.

Edwards’ patched up Torana returned for Race 2 but stopped on the opening lap with mechanical troubles.

See below for footage of the Richards/Karanfilovski accident