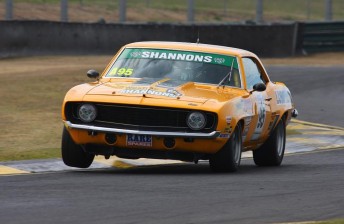 Andrew Miedecke climbed through the field to take the win

Andrew Miedecke broke through for his first win of the 2012 Touring Car Masters season with a brilliant last-to-first drive in the final race of the year at Sandown.

The Chevrolet Camaro driver, who failed to start Race 2 after suffering engine problems in the opening heat, methodically picked his way through the field to arrive on the back of race leader Brad Tilley with three laps remaining.

Tilley, who had led since the start, then spun at Turn 1 on the final lap while under heavy pressure from Miedecke.

Bowe had run second to Tilley in the early stages but could not compete with the straightline speed of those around him.

Chris Collins and Tony Edwards recovered from earlier rollovers in Race 1 and 2 respectively to fill sixth and seventh.

Tilley recovered from his spin for eighth ahead of Gary O’Brien and Greg Keene.

The results ensures Bowe’s title winning season ends with a fifth round victory from eight starts. Crick and Tilley rounded out the weekend podium.