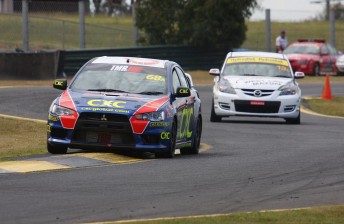 Thomas drove solo to victory in Race 1 for the AMC

Thomas drove the 40 lap race solo after his father and co-driver David withdrew with illness following the morning’s practice session.

“Stuart made a mistake out of Turn 4 and that’s where I was able to get passed,” said Thomas afterward.

“Then I missed a gear on the final lap and I thought he would get passed, but he didn’t. It’s a sensational result to win it with two laps to go like that.”

Beric Lynton was the best of the rest with third in his BMW 1M, while early leaders Ryan Simpson and Jim Pollicina came home fourth after an early unscheduled pitstop courtesy of a delaminating tyre.

The first of three Dial Before You Dig Australian Saloon Car Series races for the weekend saw Simon Tabinor seal the title with a race win.