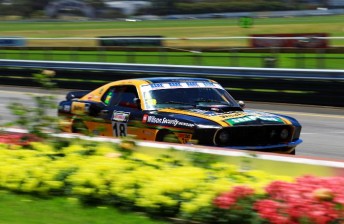 John Bowe has edged closer to his second consecutive Touring Car Masters title by taking pole position for the final round in a tight qualifying session at Sandown.

Bowe’s best time of 1:17.03s proved just 0.04s quicker than that of Andrew Miedecke, setting up a Ford Mustang versus Chevrolet Camaro front-row.

The Ford pilot elected to complete just two flying laps in the 20 minute qualifying session thanks to the hot conditions, while rival Miedecke completed just one.

Jim Richards also attempted a single hot lap in qualifying and will line-up third in his AMC Javelin after being forced to park his Falcon Sprint following a blown oil seal in practice.

The result marked Bowe’s seventh pole from eight rounds, and his first since splitting with former car preparer Dick Savvy following the penultimate event at Bathurst.

“We’ve got a whole new team from Maranello Motorsport and to do this for the new guys, it’s quite satisfying even if the gap is quite minute,” said Bowe.

“I’ve know the Maranello boys for quite a while, do a lot of racing with them and I’m very comfortable with them – they’re young blokes and they’ve got great discipline so are doing a great job.

“It’s such a great car and has been very well looked after all year and I hope I can get a good start, but the rest of the weekend will depend a lot on tomorrow’s first result, ready for the reverse top 10 and the finale. Anything could happen.”

Bowe enters the opening race of the weekend with an almost insurmountable 133 point over Jim Richards.