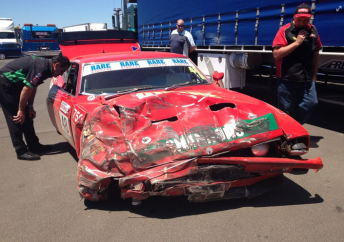 The aftermath of Eddie Albelnica’s accident

Two major accidents have highlighted practice in the opening day of action at Sandown Raceway today for the final round of the Shannons Nationals Motor Racing Championships.

Suzuki Swift driver Jamie MacMaster was the first to come unstuck, rolling his Swift racing series entry in the run down towards the Dandenong Road corner.

His car rolled onto its roof, however, MacMaster was able to climb out unaided and walk away.

The drama did not stop there though, with local Touring Car Masters driver Eddie Abelnica badly damaged his XB Ford Falcon Coupe’ in a substantial impact at the same point of the circuit.

Abelnica walked away, but the car is unlikely to take any further part in this weekend’s final round of the TCM series.

While it was drama for some, it was business as usual for others, with the Chevrolet Camaro driver Andrew Miedecke edging out Bowe in today’s three TCM practice sessions.

Kumho V8 Touring Car series leader Josh Hunter topped practice in the emerging class, though there was less than one-second covering him and his closest title rival Jim Pollicina.

Qualifying and three races – one each for Saloon Cars, V8 Touring Cars and the AMC – will be held tomorrow afternoon.