FPR: Chaz Mostert free to drive for another team

FPR: Chaz Mostert free to drive for another team 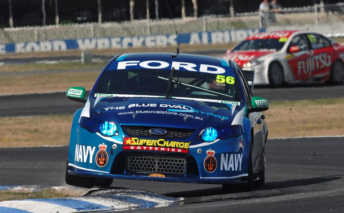 Ford Performance Racing’s team principal Tim Edwards says that the team’s Dunlop Series protege Chaz Mostert is free to drive for another V8 Supercars, if they can not fit him into their own squad next year.

Mostert, a contracted driver to the Prodrive-owned squad, has competed in the Dunlop Series with the factory Ford team this year and is currently third in the title chase behind Scott McLaughlin and Nick Percat.

While an opening has become available with FPR expanding to four cars next season (for Charlie Schwerkolt’s #18 Racing Entitlements Contract), Mostert is not guaranteed the drive, with Alex Davison heavily linked to the ride.

If Mostert misses out on Schwerkolt’s seat, Edwards says that he will not prohibit him from driving another team in the V8 Supercars Championship.

“First and foremost, I’d love to see him drive our fourth car next year, but if that can’t happen, then absolutely, the next best thing for him will be to drive in the Main Series for somebody else,” Edwards told Speedcafe.com.

“He’s got the raw speed, and you’re either born with that or not. He’s got it.”

While a drive in the Championship is Mostert and Edwards’ first priority, Edwards did not rule out another season in the Dunlop Series.

FPR has sold two of its current cars to Matthew White Motorsport for next year, with another two expected to head to the Evans Motorsport Group, who recently confirmed it will merge with Greg Murphy Racing next year.

Edwards has kept one of the current-specification cars in its fleet, intentionally for Mostert, should it be required.

“There’s a chance we could run a car in the Dunlop Series for Chaz and that is exactly the reason why I have kept one car,” Edwards said.

“At this point, I’ve made no decision on that yet.”

Mostert heads to the final round of the Dunlop Series at Homebush in third place after he was penalised 50 points for a clash with Andrew Jones in Race 1 at Winton – one of a number of incidents that Mostert was involved in.

“It has been a matter of harnessing his speed,” says Edwards of Mostert’s 2012 season.

“He made a bad start to the first race and that led to everything else that happened.

“There were other small mistakes, but he was trying. He didn’t go to Winton to finish sixth or seventh.

“In the Dunlop Series races, there was no overtaking, except for Chaz. I’m encouraged by that, and I think most people in pit lane saw that too.

“There’s 82 points between first and fourth. It’s anyone’s championship, so we’ll be putting a lot of our focus on Chaz.”