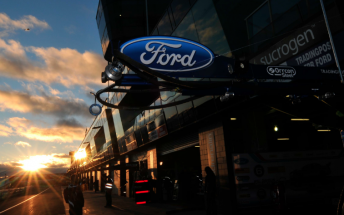 Ford Australia has appointed a new motorsport and sponsorship boss for its V8 Supercars program.

Barrie has moved into a new role within the company as the Ford Regional Manager, Southern Region.

Francis has worked at Ford for 35 years, holding a variety of management roles, most recently as Retail Communications and Dealer Relationship Manager, based in Melbourne.

A long-time motorsport enthusiast, Francis has not only been a keen fan of WRC, F1, MotoGP and V8 Supercars and has participated in club-level rallying during his university days in South Australia.

Francis’s appointment will come into effect on December 1. Alongside Barrie, Francis was at Winton last weekend, being introduced to leading Ford team members and V8 Supercars officials.

Francis says that he is looking forward to his new challenge.

“I’m very excited to be taking over the role as Group Manager, Motorsport, Sponsorships and Events,” Francis said.

“I see it as a great opportunity to continue to work with the teams and drivers, expanding on the strategic work undertaken this year in preparation for FPR’s expansion to a four-car outfit, the Car of the Future launch and Ford’s re-entry to the ARC in 2013.”

Barrie says that he enjoyed his time working with Ford’s V8 Supercar teams.

“For me, my new role will be different,” Barrie told Speedcafe.com.

“It’s completely different and it will be hard to compare them. One is a high-profile, intensely passionate role, but this will be different, working with the dealers.

“I really enjoyed my time with the V8 Supercars teams and seeing their progress through the year. FPR went close to winning this year’s championship, but I think we’ve got a very strong team that are in good shape for the future.”