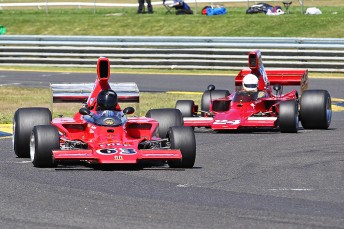 Thornton has acquired the ‘long-wheelbase’ McRae GM1 #15, last driven to victory in Australia by Kiwi Chris Hyde at the 2011 Australian F1 Grand Prix.

He will take on a field of Australian, New Zealand and American-based cars in a series of races over the three-day meeting, culminating in a feature race on Sunday afternoon.

On the form displayed at the recent Sandown Historic race, Melbournians Andrew Robson and Paul Zazryn (both in Lola T332s) should head the local challenge, along with Matich-mounted Aaron Lewis.

Frank Matich himself is the patron of the meeting and will be present to see how his car performs.

Debuting in F5000 at the event will be Sydneysider Tom Tweedie in the Team VDS Chevron B24, recently acquired from Lewis.

As well as the F5000s, a grid of over 40 1960s open-wheelers is set to contest the feature Tasman Revival race on Sunday, with the 50th anniversary of the first Australian Formula Junior championship also commemorated – that first race was won by Revival patron Frank Matich.

Tickets for the weekend include $50 three-day pass, $75 Sunday Family pass (2A/2C), while children under 12 are free.