Off-road legends back together for Dakar assault

Off-road legends back together for Dakar assault 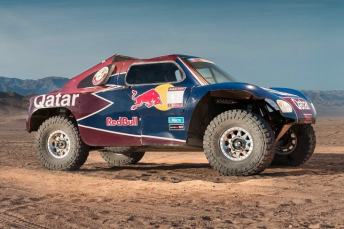 Carlos Sainz and Nasser Al-Attiyah have unveiled the machine they will use to tackle the gruelling Dakar in South America in January.

The Qatar Red Bull Rally Team has revealed its new buggy, inspired from US Baja-style desert-racers, but has combined that American durability with European engineering to create what the team believes is an innovative off-road vehicle.

The duo drove together as part of the Volkswagen effort in the Dakar, with a sometimes volatile relationship as they were allowed to race without team orders.

The withdrawal of VW prior to this year’s event left both drivers without a full factory drive, but the 1990 and ’92 World Rally Champion is looking forward to this project with the Qatari.

“There’s nothing quite like preparing a completely new car for a Dakar Rally and my first impressions of this buggy is that it’s a very impressive machine,” said Sainz.

“The whole team has great hopes that we can achieve a good performance at the 2013 Dakar Rally. It’s still very early days to be saying how far up the leader board we can finish in this car but we are working everyday to make sure we get the set-up just right.”

Al-Attiyah, who has been involved with the project since the beginning, believes that just making it to the finish in the new buggy will be an achievement in itself.

“I’m under no illusion that coming to the Dakar with a completely new car is perhaps the toughest challenge I have ever faced at this race,” said the Qatari driver.

“The entire Qatar Red Bull Rally Team are going to have to carry on the hard work that has got us to this stage in these few weeks before the race and continue that effort during the actual Dakar. My ambition right now is just to reach the finish in this new car. If we make it that far then everyone involved can be proud of the job they have done.”

Between the start line in Lima, Peru and the finish line in Santiago, Chile lie over 8,500 kilometres of rugged terrain which the buggies will have to survive if either driver is to have a repeat of their victories.

Testing will continue on the buggies until they are transported to South America at the end of next month.