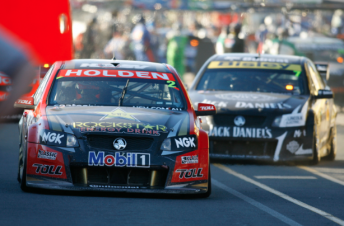 Leading Walkinshaw Racing staff members Mike Henry and Erik Pender have left the factory Holden operation, but they’re unlikely to be outside of the V8 Supercars paddock for long.

Henry, the racing operations manager at the Holden Racing Team, was not present at the squad’s home race at Winton last weekend and has parted ways with the team this week.

Speedcafe.com understands that Henry and Pender could both be headed to Kelly Racing, which is currently in the midst of its transition into Nissan Motorsport in time for the 2013 season.

The Kellys have a history of working with the duo having been Walkinshaw mainstays themselves prior to starting their own team.

Team owner/driver Rick Kelly confirmed to Speedcafe.com that he was aware that Henry and Pender have left WR, but denied that a deal for them to join his team has already been done.

“Losing those guys is huge for their (Walkinshaw’s) organisation as they are high calibre staff.

“People like Mike and Erik would be the right fit for with our team in our quest to be the best.”

Pender had enjoyed an unbroken 14 year spell at Walkinshaw Racing while Henry worked for the company on-and-off since joining road car arm HSV as a mechanic in 1987.