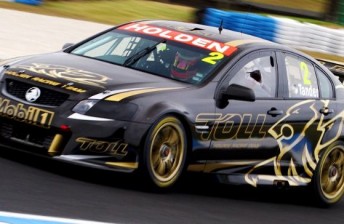 The Holden Racing Team and Garry Rogers Motorsport have become the first teams to test their 2013-specification Car of the Future V8 Supercars at Victoria’s fast and flowing Phillip Island circuit.

The two teams elected to take advantage of the COTF testing rules that allow one of the two ‘manufacturer’ days to be completed outside of a team’s designated testing venue.

The day marked Garth Tander’s first taste of a COTF after the HRT’s first three tests with its new car – an initial shakedown at Calder Park, a manufacturer day at Winton and a V8 Supercars-supervised gearbox cooling day Winton – were shared between Nick Percat and James Courtney.

“Early days for our car, but pretty happy with the initial impression,” noted the 2007 V8 Supercars Champion after completing almost 100 laps.

“(It’s) not radically different to what we have now, but a nicer, more refined version of the current V8 Supercar.”

GRM’s test also saw its regular driver Alex Premat take to the wheel of a COTF for the first time.

Following its initial shakedown at Winton earlier this month, the Fujitsu-backed team had elected to spend the first of its two manufacturer days at Phillip Island in order to share the date with the HRT.

Both cars tested in their VE Commodore bodywork while homologation of the new VF model continues.

The VF took part in a five-day V8 Supercars aerodynamic test at the East Sale, Gippsland, Royal Australian Air Force base prior to last weekend’s Winton race meeting, where it was evaluated against the Ford Falcon FG and Nissan Altima for the first time.

The new bodywork will be used by all Holden teams from the start of the 2013 season.