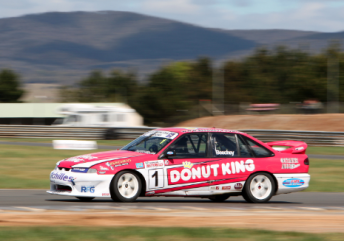 The curtain will close on the V8 Commodore Cup class at Sandown this weekend, marking the final ever time the category will run as a national motor racing class.

Due to dwindling numbers, category administrators have elected to pull the plug on the series, bringing an end to its two decades of competition.

The last Commodore Cup round was held at Winton for its signature two-driver race recently, with only five cars competing in the two races.

Nine cars have entered for the final Sandown event. Reigning champion Adam Beechey has already wrapped up the title.

While the national title will no longer run, the cars will remain eligible for state-based Improved Production classes.

The category was first run in 1994, with David Gittus securing the inaugural title. Geoff Emery will go down as the most successful driver in the class, having won five titles.

Like Emery, a number drivers have used Commodore Cup as a stepping stone to the V8 Supercars. Most notably is Lee Holdsworth, who competed in his first tin top race in a Commodore Cup entry before driving in the Development Series in 2004.

The ‘Last Blast’ for Commodore Cup will be one of six categories at Sandown this weekend for the final round of the Shannons Nationals. The Touring Car Masters headline the show, alongside the Kumho Tyres Australian V8 Touring Car, the Australian Manufacturers Championship for Production Cars, the Dial Before You Dig Australian Saloon Car Series and the Hi-Tec Oils Australian Swift Racing Series.