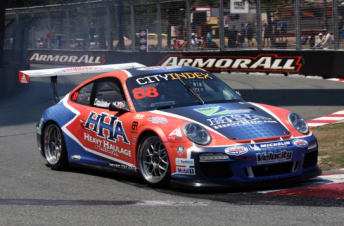 Shae Davies has confirmed that he will return to the Porsche City Index Carrera Cup Championship for the final round at the Sydney Telstra 500.

The 22-year-old will compete in the PCA Guest Car – the same car that he made his Carrera Cup debut in at the Gold Coast last month.

In his maiden meeting, Davies finished an impressive sixth overall, and now with his Formula Ford deities over for the season (finishing fourth overall), Davies is ready to apply 100 percent of his focus to his second Carrera Cup race.

“I’m just stoked to be having another run in the car,” Davies said.

“After spending the Gold Coast weekend learning how to drive these awesome machines, I can’t wait to get back out there.

“In the last race at Surfers I was mixing it with guys who have been driving the Cup Cars for a long time and being able to lap just over half a second away from the front-runners was very satisfying. I’m not making any bold predictions, just really looking forward to being back out there.”

Davies will continue to enjoy support from Heavy Haulage Australia, who backed his entry at the Gold Coast.

“We had a ball with the guys from Heavy Haulage who just loved being at the Gold Coast and they will be back for more at Homebush too,” he said.

“I want to give them a return for the continued faith they have placed in me.”

The Carrera Cup will support the final V8 Supercars event of the year at the Homebush street trackl in Sydney on November 30-December 2.