The V8 Supercars ‘Silly Season’ has kicked into overdrive, with a number of recent confirmations opening up a raft of possibilities for the 2013 V8 Supercars grid.

While the four most coveted seats in the field – at Triple Eight Race Engineering and Ford Performance Racing – will not change hands for 2013, there are still up to eight drives yet to be signed and sealed for next year’s championship.

The most prized seat in the field is the #18 entry at Ford Performance Racing, and leading the charge for a birth at the factory team is Alex Davison.

Davison in the box seat to secure the drive in the Charlie Schwerkolt-owned entry that will move from Dick Johnson Racing to complete a four-car line-up at FPR next year.

While the #18 seat is yet to be confirmed, Garry Rogers Motorsport announced at the weekend that Michael Caruso will leave his post at the Victorian team at the end of this year. 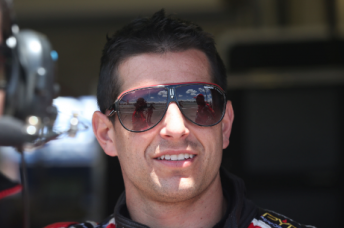 Caruso has been heavily linked with Nissan Motorsport to join the four-car Altima squad (alongside Todd and Rick Kelly and James Moffat).

Any number of names could end up replacing Caruso in the #34, with team owner Garry Rogers traditionally selecting and announcing his driver line-up close to the start of the season.

With Caruso out, it is understood that current driver Alexandre Premat is likely to retain his ride, with the likes of Scott McLaughlin, Greg Murphy, Greg Ritter and Jack Perkins all being mentioned as possible Caruso replacements.

Murphy’s two year stint at Kelly Racing will end after the Sydney Telstra 500 – confirmed today by Kelly Racing. The four-times Bathurst 1000 winner has been a loyal Holden driver all of his V8 career it would be most unlikely for the Kiwi to switch manufacturers. His only realistic option remains at GRM – a team that could benefit from an experienced hand.

Karl Reindler, Murphy’s team-mate this year, is also on the look out for a drive after the Kellys confirmed he would not be part of the 2013 Nissan program.

Reindler has endured a difficult year in the #11 entry, but may be attractive to certain teams, given his four years of V8 experience, and a healthy personal budget to boot.

Tekno Autosports is one team understood to be interested in the West Australia. Michael Patrizi is likely to leave the squad at the end of the season, and Tekno will need a new team-mate for Jonathon Webb.

The news of Caruso, Murphy, Reindler and Patrizi leaving their squads has been brewing for months, unlike the situation at Stone Brothers Racing/Erebus Motorsport AMG E-Class, where the team is dealing with the shock news that Shane van Gisbergen will depart the sport.

With few proven contenders available to take over from van Gisbergen, the possibility that the team will look outside of Australian shores for a left-field replacement cannot be ruled out.

In other news, the Dick Johnson Racing organisation will drop back to two cars, with confirmation that Paul Morris has sold his #49 Racing Entitlements Contract to Lucas Dumbrell, who will expand to two cars in 2013.

The team’s endurance driver Scott Pye has been linked to the LDM team, while Tim Blanchard has also been talked about as a possible second driver.

The decision of Morris to sell his REC leaves Steve Owen without a drive and puts arguably one of the most experienced and credential led drivers on the market.

Steven Johnson will stay on at DJR while Dean Fiore is yet to make a firm decision on his future.