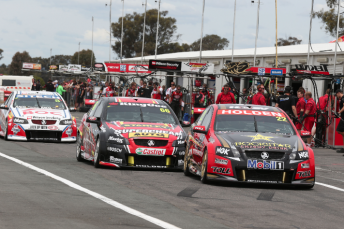 The V8 Supercars Commission is close to finalising its race formats for the 2013 V8 Supercars Championship, with a move to shorter races tipped to be on the cards.

A widespread dislike for the high level of influence that fuel economy has had on races this season is understood to be the key motivator for the new direction.

Although V8 Supercars is keeping its cards close to its chest, as few as six of the 16 events on next year’s calendar are expected to feature in-race refuelling.

Three-race weekends are likely to be in vogue next season, pending final deliberation from the V8 Supercars Commission.

“Like any sport, we’ve tried to look at all rules and regulations, see what works, what doesn’t and make changes where we see fit,” V8 Supercars CEO David Malone told Speedcafe.com of next year’s formats.

“The Commission have been working on the race formats for the last month and a half, and we’re very close to having something locked away. We have a bit more work to do, but they are close.”

One element already decided upon is the removal of the in-car fuel trim adjusters, which were introduced in 2011 to allow drivers to switch between four pre-determined engine maps during races.

The combination of the switches and the mixed tyre format so prevalent on this year’s calendar has seen engine bills skyrocket among the leading teams as motors are leaned to their limits.

“Currently the temptation is there to run the cars too lean and that effects engine life,” TeamVodafone team principal Roland Dane explained to Speedcafe.com.

“The teams with less resources can’t afford to do it and that’s not really fair on them.

“If you’ve got to tune your engine to one map (without the trim switches) that you’ve then got to live with, it’s up to the drivers to manage the economy. In hindsight that’s a better solution.”

Although fuel mileage will still play a role in the championship’s longer, marquee events, the shift of emphasis away from economy will marginally lessen the pressure on V8 Supercars’ technical department to perfectly match the consumption of the new double-overhead cam Nissan and AMG engines to the current Ford and Holden units.