Touring Car Masters goes down to wire at Sandown

Touring Car Masters goes down to wire at Sandown 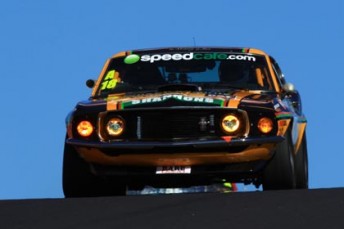 The grand finale for the Touring Car Masters will see both of its classes go down to the final round at Sandown Raceway this weekend, alongside the Shannons Nationals Motor Racing Championships.

Reigning Class A champion John Bowe currently leads the title by 133 points ahead of Jim Richards, with Bowe in the box seat to claim his second consecutive title.

Richards has elected to switch to his 2010-winning 1964 Ford Falcon Sprint, electing to leave his AMC Javlin in the garage. Richards remains the only driver with a mathematic chance of snatching the title from Bowe.

In the Class B division, Chris Stillwell leads Nigel Benson by a commanding 159 points.

While the title may be out of reach for most of the 30 car field, others are still trying to secure some late-season glory.

Steve Mason is changing the rear end of his Shelby and is hopeful that the changes can make some inroads on the leading drivers.

“The Shelby is having a rear end makeover with the whole differential and rear spring setup pulled out to be straightened and softened, taking away the nerves we felt on Conrod,” Mason said.

“Hopefully this will give it a bit more traction off the corners so that we can have a really good go at Sandown. All the development is being part of seeing the ‘66 Shelby a faster race package so that we can be genuine contenders next year.”

The Touring Car Masters field hits the track on Friday, with other categories on the Shannons Nationals bill including the Kumho Tyres Australian V8 Touring Car, the Australian Manufacturers Championship for Production Cars, the Dial Before You Dig Australian Saloon Car Series, Commodore Cup and the Hi-Tec Oils Australian Swift Racing Series.