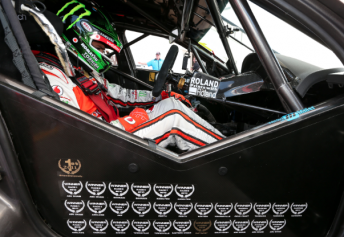 Champion V8 Supercars team Triple Eight has urged its rivals to improve their on-track performances, or risk more domination at the hands of Jamie Whincup and Craig Lowndes.

Whincup’s success is the first time in a decade that a V8 Championship has been decided before the final event of the season.

Team manager Adrian Burgess was in celebration mode after the Winton event – not only claiming the two V8 titles, but beaming at the team’s win rate since Hidden Valley, having won 16 of the past 17 races.

Burgess says that the team will not rest on its laurels and promises to dish out more of the same to its rivals unless they lift their game.

“We’re achieving what we’re capable of achieving, and maybe the other teams need a kick up the bum,” Burgess told Speedcafe.com.

“We’re not that far in front. It shouldn’t be like this. They have to do a better job, because we aren’t going to back off. We love it, we love winning, and that’s what we’re here to do.

“The thing with our team is that every single person is a winner. They love it and strive on it.

“We’re up for every challenge, and if they come, that’s great. We’ll give every fight our best shot.”

Whincup’s championship success is the third in a row for Burgess, who won his first V8 title with James Courtney at Dick Johnson Racing in 2010. Burgess switched to Triple Eight in 2011, guiding Whincup to the past two titles.

It is also the third title for the team’s Number 1 mechanics Nick Petrons and Kris Goos who switched from DJR to Triple Eight with Burgess.

Burgess spent the first phase of his career in European racing circles, and says that the current make up of the Triple Eight squad is equal to some of the best teams in the world.

“This is the best team in Australia. I’ve only played a small part in the past two years, but if you look at when Roland took over Briggs Motorsport in 2004, they had a couple of years of problems, getting systems and procedures in place. They hit their straps in 2006 and 2007 and they haven’t looked back,” he said.

“For me, McLaren was a phenomenal team, and I was very privileged to have worked there, but this team is every measure for them in our own category. It’s an incredible group of individuals all focused on the same thing.

“When you get a team of this size and you give them that momentum, it is hard to stop.”