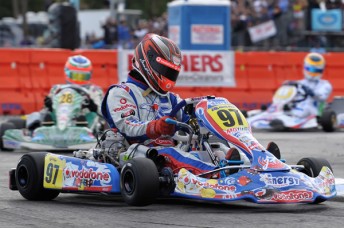 Australian Champion Chris Hays mixed it with the world’s best kart racers before recording an impressive top ten finish at the 16th Annual SuperNationals in Las Vegas, America on Sunday.

Competing in arguably the world’s toughest karting category, KZ2 (six-speed gearbox) on the temporary circuit behind the Rio Hotel and Casino, the reigning Castrol EDGE CIK Stars of Karting Champion showed maturity and composure well beyond his 18 years across the weekend.

After a pair of eighth placings and a DNF in his three qualifying heat races, Hays lined up 15th for the 30-lap main event.

The Gold Coaster, who was competing at the event with the Buddy Rice Karting team in a European-made Energy kart, endured a tough start to the main event dropping to 22nd on the opening lap due to a turn one fracas. Not deterred by the job ahead of him, Hays charged through the field to be placed inside the top ten at half race distance.

Unfortunately a broken reed petal on his engine curtailed his charge to the front and he was forced to settle for tenth place at the chequered flag – the best finish by an Australian in the feature class at the event.

“It was a brilliant weekend, it is an amazing event. To see all of the big trucks and factory teams was amazing, I can’t wait to come back next year,” said Hays.

“Lining up against World Champions such as Marco Ardigo and Bas Lammers along with the European Champion Jorrit Pex and many, many more of the world’s best was an amazing experience. I wasn’t intimidated but just raced hard and did the best I could – which ended up being a top ten.

“Being in Vegas was great, just looking over the track and having the background of the famous strip gave it some great atmosphere.

“I’d really like to thank the Energy Corse team for all of their help, Adam Graham and Jon Targett, my Dad for all of his dedication towards my racing and the organisers of the CIK Stars of Karting Series who put up the $10,000 scholarship for winning the 2012 championship that helped me get here.”

Another pair of Australians to record top ten results at the event was West Australians Thomas Schou and Thomas Howe. As two of four Australians competing in the TaG Junior category, Schou finished in seventh place, two spots ahead of Howe. The Kosetcki brothers, Jake and Kurt, also showed good speed throughout the weekend in the class. Jake finished 15th in the final race while a turn one incident ended Kurt’s hopes of a good result after starting inside the top ten.

Other other Australians competing at the event Jason Faint finished 11th in the S2 class, David Sera 17th in TaG Senior – the same category James Allen was 17th in the last chance qualifier.  Four Australians lined up in the TaG Cadets category with Jack Doohan and Lachie Hughes making it through to the main event where they were non-finishers.