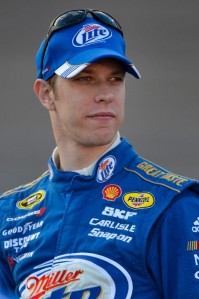 The 28-year-old Keselowski was assured the championship when rival Jimmie Johnson pulled his Hendrick Chevrolet into the garage with a driveline failure with just 40 laps to go.

Johnson had been in a promising position to overhaul Keselowski’s points lead in the closing stages before a bungled final pitstop necessitated a return to pitlane several laps prior to the eventual failure.

Keselowski’s success also marks Dodge’s first Cup Series championship since Richard Petty scored his sixth crown in 1975. The car manufacturer announced mid-season that it will not continue in the sport next year.

The Homestead race was won by Hendrick driver Jeff Gordon, who led home the Waltrip Toyota of Clint Bowyer just one week after the two drivers and their respective teams clashed on and off track at Phoenix.

The result proved enough for Bowyer to overhaul Johnson for second in the points standings.

Championship standings after 36 of 36 races