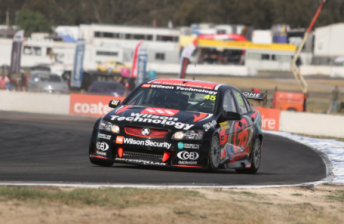 Dale Wood has taken victory in the Dunlop Series’ reverse top 10 second race at Winton, which will go down as one of the class’s wildest encounters on record.

Wood trailed Andrew Jones to the finish line under yellow flag conditions but inherited the win when the latter was relegated to 16th thanks to a five-second time penalty for jumping the start.

The victory is Wood’s first since making his Dunlop Series debut in 2007.

Race 1 winner Nick Percat escaped several bouts of carnage in front of him to finish second ahead of Luke Youlden, George Miedecke and Drew Russell.

Starting from pole position, Geoff Emery had dominated the first half of the race before seeing his three second lead erased thanks to a Safety Car on Lap 7 of 12.

The yellows had flown thanks to a mistake from points leader Chaz Mostert, who left the road at the exit of Turn 6 while chasing second-placed Ashley Walsh, beaching his Ford Performance Racing Ford in the sand trap.

Walsh soon made his move on Emery at the restart, but both would leave the circuit while running side-by-side into the Turn 5 sweeper after the Ford received a tap from Jones.

Emery rejoined at Turn 8 with an extended lead over the now second-placed Jones and soon received a drive-through penalty for his actions.

Yet another incident soon after, this time involving Elliot Barbour – who had earlier stalled from second on the grid – and Brett Stewart at Turn 3 saw a second Safety Car called, freezing the positions to the chequered flag.

The results see Mostert’s and McLaughlin tied for the series lead with four races remaining. Percat is now just 56 points from the lead, with Pye a further 40 adrift in fourth.

The combined results from the first two Winton races will see Percat and Youlden share the front-row for Race 3, with Wood, Pye, McLaughlin, Walsh, Mostert, Miedecke, Jones and Drew Russell will filling third through 10th.