Whincup ‘bottling up’ emotions until after Sydney finale

Whincup ‘bottling up’ emotions until after Sydney finale 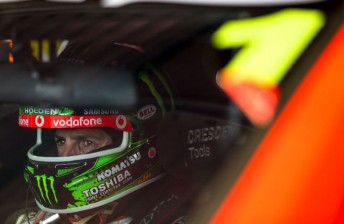 Jamie Whincup remains determined not to celebrate victory in the 2012 V8 Supercars Championship prior to next month’s season finale in Sydney.

The TeamVodafone driver will head into the 15th and last event on the calendar with a 317 point lead over second-placed Mark Winterbottom.

Although there are only 300 points still available, the slim possibility of Whincup enduring poor results and attracting points penalties in Sydney has the 29-year-old refusing to acknowledge that his fourth title is already won.

“Mathematically it’s looking extremely good,” he dead-panned in front of an amused post-race press pack, prompting Winterbottom to jokingly add “I’m still in it” when asked of his disappointment at seeing another title slip away.

“Why not bottle it all up until the last race on the last day and let it all rip after that?”, Whincup concluded.

Whincup’s conservatism was in stark contrast to his on-track efforts across the weekend, which included two spirited duels with friend and rival Will Davison early in today’s race.

The TeamVodafone driver later charged from 23rd to third over the final 20, Safety Car-free, laps of the race following a drive-through penalty for having his wheels spinning in the pitlane.

“I’ve been really enjoying my racing in the last two months and it’s a race,” he said of his early scraps with Davison.

“Forget about the championships and the points and what not we raced hard. We raced (James) Moffat hard yesterday and had a cracker with Will today on a couple of occasions.

“It was good fun coming back through the field like that… it was maximum attack.”