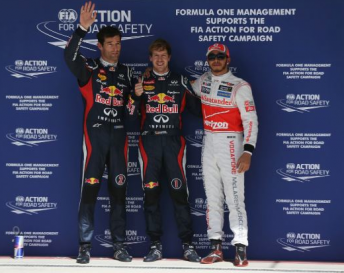 Sebastian Vettel has continued his uninterrupted run at the head of the Formula 1 field at the new Circuit of the America’s circuit, edging out Lewis Hamilton for pole in the United States Grand Prix.

The German championship leader used a new front wing on his Red Bull that only arrived last night to set the pace in the final qualifying session with a 1: 35.88s.

McLaren’s Lewis Hamilton was the only driver able to offer a realistic challenge, setting a time just over 0.1s behind the runaway Red Bull driver.

Australian Mark Webber managed 1:36.17s for third, but his position may be to his advantage given that the odd numbered grid positions will be favoured by clear track at the start.

Romain Grosjean produced a solid fourth in his Lotus, however, he will receive a five grid-place penalty for a gearbox change.

Ferrari’s Felipe Massa, Force India’s Nico Hulkenberg and title contender Fernando Alonso will start sixth through eighth, while Grosjean’s penalty will see him take up the ninth place on the grid ahead of Williams driver Pastor Maldonado.

Australian Daniel Ricciardo was a shock omission after the first qualifying session and will start in 18th place.

Webber and Schumacher were investigated after the session for missing a weighbridge and impending Fernando Alonso respectively but both escaped without penalty.

See below for Speedcafe.com’s F1 Race Guide for the United States Grand Prix