RPM confirms Ambrose and Almirola for 2013

RPM confirms Ambrose and Almirola for 2013 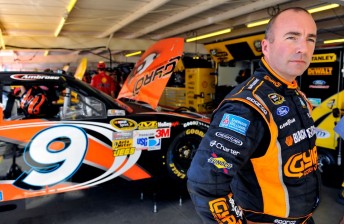 Marcos Ambrose will steer the #9 once again in 2013

Australian NASCAR driver Marcos Ambrose will return to Richard Petty Motorsport for a third Sprint Cup season in 2013, the team has finally confirmed.

Ambrose’s #9 Ford Fusion will continue to be backed by Stanley and Dewalt in 2013, and once again be run alongside the team’s #43 entry of Aric Almirola.

In addition to a second straight victory at the Watkins Glen road course, Ambrose has scored the first two pole positions of his career in Michigan and Sonoma this year.

Having worked with three different crew chiefs – Todd Parrott, Mike Ford and now Drew Blickensderfer – throughout the season, Ambrose says he’s looking forward to benefiting from some stability in 2013.

“It’s good to come back to Richard Petty Motorsports and focus on our future together,” he said.

“We had success this year and recently have made plans to get better for 2013 and beyond. It was great to win at Watkins Glen, earn my first two poles and also have the opportunity to make the ‘Chase’ this year.

“I think the Petty organisation, and this number 9 team under the leadership of ‘The King,’ Sammy (Johns) and Drew (crew chief Blickensderfer), is going to be even stronger next season. I can’t think of a better place to be and am ready to win.”

Ambrose currently sits 18th in the 2012 Sprint Cup points standings and will start this weekend’s season finale at Homestead-Miami from the outside of the front-row.