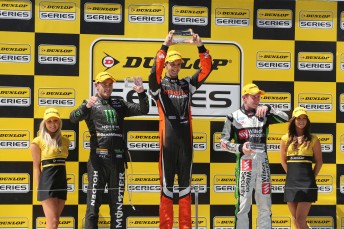 The Dunlop Series is set for an exciting conclusion on the streets of Sydney Olympic Park next month after Nick Percat secured a second consecutive round win at Winton.

The Coates Hire Commodore driver led every lap of Race 3, holding out Triple Eight’s Scott Pye in a close finish to score his fourth win in five races.

Pye took second place from Dale Wood halfway through the 12 lap encounter and, although able to quickly close down Percat’s two second lead, was unable to find a way around the Walkinshaw prepared Holden.

Wood secured third for the round by holding out Scott McLaughlin and Chaz Mostert to finish third in the race.

Starting seventh due to the grid being set on combined points from the opening two heats, Mostert pulled off clean passes on Ash Walsh and Luke Youlden – surviving a wild lock-up and off at Turn 1 while attempting a move on the latter.

Walsh eventually found his own way around Youlden on the final lap to finish sixth, while Rodney Jane, Drew Russell and George Miedecke filled eighth through 10th.

Having been tied at the top of the standings following Race 2, the result sees McLaughlin take a seven point lead over Mostert heading into the final round. Percat is now just 32 points off the lead in third, with Pye a further 50 adrift in fourth.

Series standings after Round 6 of 7