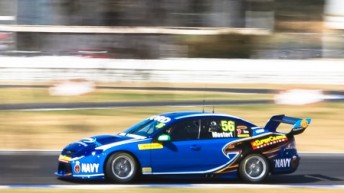 Chaz Mostert’s Dunlop Series title chances have struck a blow after he was penalised 50 points for an incident in Race 1 at Winton Motor Raceway.

The Ford Performance Racing team driver was handed a 50 point penalty for a collision with Andrew Jones in Saturday’s Race 1.

The factory Ford team appealed the incident but were unsuccessful.

It is the second 50 point penalty that Mostert has received this year, following his clash with Nick Percat in Race 2 at Queensland Raceway.

The result of the Winton penalty sees Mostert slip to third in the championship, 57 points behind series leader Scott McLaughlin.

In other penalties, Aeron Russell was penalised 25 points for short-cutting the circuit in Race 1, while George Miedecke copped a 25 point penalty for contact with Jones in Race 3. It is alleged that Miedecke left the circuit before the hearing, without the permission of the stewards.