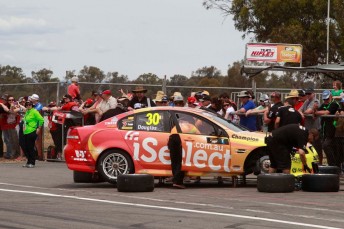 Speedcafe.com understands that the V8 Supercars Board will review the sale terms this Tuesday.

If the sale goes ahead, it will be the second REC sale under the Archer Capital/V8 Supercars ownership structure, following the sale of Larry Perkins’ two RECs to Kelly Racing.

Morris acknowledged his intention to sell to Dumbrell, which if approved, will leave Morris as the owner of one REC (currently leased by Tekno Autosport).

“Lucas and I have agreed to terms and now its in the Board’s hands for approval,” Morris told Speedcafe.com.

“We’ll find out the outcome of that this week.”

If the sale of the REC goes through, it will almost certainly reduce Dick Johnson Racing’s entries to two cars for Steve Johnson (#17) and Dean Fiore (#12).

Dumbrell, the youngest V8 Supercars team owner in the paddock, opened the doors to his team in 2010 after purchasing one of Tasman Motorsport’s RECs.

LDM’s current driver Taz Douglas currently sits 25th in the championship standings with a best finish of 12th in the third race of the season at Symmons Plains.

Current Dunlop Series driver Scott Pye, who partnered Douglas at Sandown and Bathurst this year, has been heavily linked to one of LDM’s seats for next season.