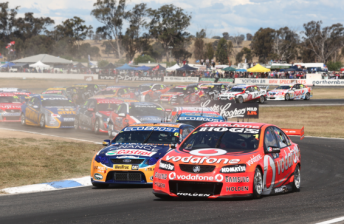 Jamie Whincup leads at the start of Race 28 today

Jamie Whincup has fought back from a mid-race drive-through-penalty in Race 28 at Winton to secure his fourth V8 Supercars Championship title.

The TeamVodafone Holden driver led the race after the first round of stops but soon dropped to 23rd while serving a drive-through for having his wheels spinning in the pits.

Despite a lack of subsequent Safety Car periods, Whincup clawed his way back through the field to finish third behind race winner Craig Lowndes and title rival Mark Winterbottom.

The result means that Whincup now has a championship lead in excess of the 300 points available at the final round in Sydney, although the possibility of points penalties during next month’s event ensures the title is not yet officially won.

Whincup drove far from conservatively in today’s race, engaging in spirited duels for the lead with Will Davison off the initial start and later on a Safety Car restart.

Davison had elected to start on the soft tyre and sprinted to a 10s lead over the first 15 of 47 laps. A Safety Car, called as James Moffat struggled with electrical problems, subsequently ruined the Tradingpost Ford’s strategy.

Davison inherited the lead when Whincup peeled into pitlane to serve his drive-through on Lap 26 before yielding to team-mate Winterbottom and eventually falling to 11th while on the hard tyres in the third and final stint.

Winterbottom was in the box seat to win the race following the second round of stops but complained of steering problems in his Orrcon Ford and could not match the pace of Lowndes, who slipped by on Lap 44.

The #888 Holden did not hit the lead until just 17 laps remained though as Bright, one of several on a three-stop strategy, had jumped to the front in the second round of stops. The Team BOC Holden dropped to 17th with its final pitstop before charging back to sixth over the final 16 laps.

Whincup’s rise through the field was the real focal point, however, with the TeamVodafone driver moving past Tim Slade and into the fourth placed ‘championship position’ with just five laps to go.

Whincup then managed to overtake van Gisbergen a lap later as the Kiwi saved fuel in order to make it to the finish.

Countryman Greg Murphy fared less well, running out of fuel on the final lap while placed 22nd to be listed as the race’s only retirement.

Others to endure difficult days included Fabian Coulthard (who was pushed off twice in the first stint before three-stopping his way to 12th), Alex Premat (who was involved in several early scuffles, including being spun by Taz Douglas) and Steven Johnson (who served a drive-through penalty for speeding).

Lowndes’ win meanwhile is the three-time champion’s sixth of the year and the 16th in the last 17 races for TeamVodafone.

The 2012 V8 Supercars Championship will conclude with a pair of 250km races around the streets of Sydney Olympic Park on December 1 and 2.