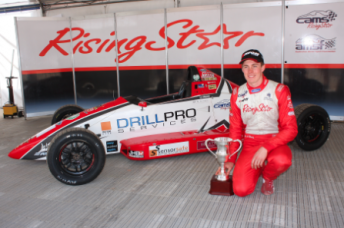 A clean sweep of race wins has seen Anton De Pasquale claim the final round of the 2012 Australian Formula Ford Championship at Winton today.

But while the Winton round concluded the national championship for 2012 in favour of De Pasquale, it was the CAMS Rising Star entries of Jack Le Brocq and Macauley Jones were awarded the major prizes.

Second overall for the round consolidated Le Brocq’s championship win, while Macauley Jones’s third for the weekend was enough for the second-generation racer to seal the prestigious Rookie of the Year title.

For Le Brocq, his 11 race victories and a perfect finishing effort set up his record breaking season.

“It’s awesome, being added to the list of Formula Ford Champions is a great feeling,” Le Brocq said.

“I managed to score over 400 points for the year, which is something nobody has been able to do.

“Winning the championship was all about being consistent, not making mistakes, and finishing all of the races.

“I’m not sure what next season holds, whether I’ll be the V8 Development Series, Carrera Cup, Formula 3 or racing overseas, but this year in Formula Ford has been very important.”

De Pasquale was a revelation in only his fourth-ever national race meeting, with the result giving the Victorian confidence heading into a full championship campaign in 2013.

“It’s a great feeling to win the three races from pole position, it couldn’t have happened without a big effort from all of the Sonic Motor Racing Services team,” De Pasquale said.

“It’s good to end the year with such a fast car.

“Next year I we will be running in the whole season, so to know I can win races gives me a lot of confidence.”

The clean sweep was far from easy for De Pasquale, with Jones leading solidly in the second race before a series of last lap passing manoeuvres.

De Pasquale eventually crossed the finish line side-by-side with Le Brocq, with the margin of victory a scant 0.04sec.

Mathew Hart came through for fourth ahead of Jones, Shae Davies and Luke Marquis.

The finale was a more straight forward affair, with time restrictions seeing the heat called short after only six laps.

Behind De Pasquale was Le Brocq, Jones, Hart, Davies and Power, who was coming back through the field after a gearbox issue in the opening race.

Fourth place for the round went to Hart, from Davies, Power, Marquis, Rhett Noonan, debutant Jayden Wallis, who also picked up the Hard Charger award, with the top-ten rounded out by Ash Quiddington.

In other point score news, Jonathon Venter was awarded the inaugural Chairman’s Cup, which was awarded to the top state level competitor at selected Championship rounds.

FINAL POINTSCORE AFTER ROUND 8 OF 8