Chad Reed charging in front of the Newcastle crowd

Chad Reed thrilled his hometown crowd at Newcastle Showground taking his third straight victory in the final round of the Terex Australian Supercross Championships, whilst Jay Marmont was able to secure a back-to-back Australian Championship for Kawasaki.

Having missed the opening round of the Championship, Reed needed to rely on other competitors to get their way past Marmont if he was going to be crowned Australian Champion.

Reed wasn’t without his own suitors, looking to spoil the party in his own backyard.

Ben Townley got the holeshot off the start, before Reed got by him. Then Motul Pirelli Suzuki’s Todd Waters sat on Reed’s hammer before he was passed by Daniel McCoy – the Yamaha racer fancying himself to challenge Reed.

Soon after, Marmont was able to work his way into second and whilst he tried valiantly, he wasn’t able to get on racing terms with Reed. In the end, the Honda-mounted TwoTwo Motorsports machine crossed the line 24 seconds in front of Marmont.

“I’ve really found my feet this past week, coming back home and getting settled in has made me really comfortable and I feel like I am back on track and ready for Anaheim 1 in January,” said Reed.

“It was always going to be a challenge to make up the points on Jay – he is a great racer and is a very deserving repeat Champion.” 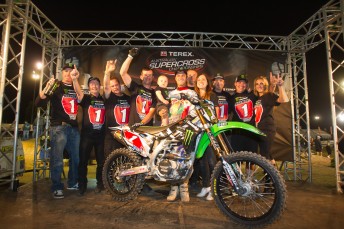 After the race, Marmont confessed he had some nerves whilst sitting at the starting grid.

“I got a bit nervous off the start and Daniel got past me, I knew he would be going out hard to I planned to get in behind me, get into a race groove and see if he would make a mistake,” said Marmont.

“I can’t thank Monster Energy Kawasaki enough. They signed me believing we could win a Championship and we had a tough time in Motocross but the whole team worked together to fight back.”