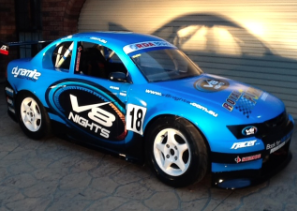 Clews, sporting new sponsorship from V8 Nights, led every lap of the 10 lap heat, cruising to victory over Peter Carr and Trent Young.

By Aussie Racing Cars standards, the race was a strung out affair, with considerable gaps separating the leaders.

In the popular Vintage Formula Atlantic class, Kim Jones looked to continue his strong practice form, scoring pole. The V8 Supercars team co-owner struck trouble during the race in his 1980 March, however, finishing in fourth place.

The Formula Atlantics will have two more events at Winton tomorrow at 1120 and 1335.