John Zappia strikes back with quickest time in Perth

John Zappia strikes back with quickest time in Perth 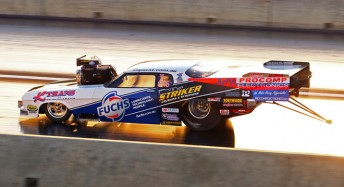 John Zappia was quickest in the Goldenstates sunshine

After being left out of the field at the opening round of the 2013 ANDRA Top Doorslammer Championship, Perth racer John Zappia has fired back with a time of 5.82 seconds to take the top spot for eliminations in round two at the Perth Motorplex.

Last round winner and Championship leader, Peter Kapiris was second quickest at the close of play, which sets up a tantalising battle in tonight’s eliminations.

Zappia was lucky not to collect the wall when he got the Stirker Crushing and Screening Monaro sideways during his second run.

Queenslander Victor Bray made the field in his iconic Sidchrome 57 Chev in seventh placing, however on the other side of Team Bray, the scenes weren’t so happy with Ben Bray bowing out of proceedings.

Bray Junior wasn’t the only big name scalp that will be watching from the terraces this evening with John Cannuli, Andrew Sutton and Stuart Bishop being in the 10 car non-qualifiers.

In the other feature class, Top Alcohol, last time Perth Motorplex winner, Rob Pilkington set the pace despite the final round of qualifying being canned due to the curfew that applies to the Kwinana venue.