James Moffat has paid tribute to his engineer Ian Walburn for the soft tyre speed he enjoyed at Winton Motor Raceway today.

The Team Norton DJR driver finished a credible fifth, leading the majority of the first portion of the race.

Moffat was over-run by race winner Jamie Whincup, Craig Lowndes, Lee Holdsworth and Mark Winterbottom in the final 15 laps of the race, but could take away plenty of positives after leading for more than half the race.

“Relative to everyone else, our car was quite speedy on the soft tyre,” Moffat told Speedcafe.com. 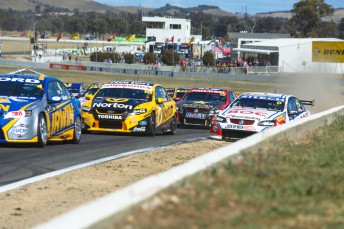 “I saw Jamie coming, then Craig, and I was prepared to let them go in the hope of being able to hold on for third, but we were hurting a bit more on the hard and I couldn’t hold on.

“We were close but not close enough.”

After a trying 2012 season, Moffat currently sits 22nd in the title chase and credits his newfound speed to a set-up ‘find’ unlocked by he and engineer Ian ‘Wally’ Walburn.

“Since Ian Walburn and I have been together, we’ve been improving and I think we both stumbled across something at the Gold Coast,” said Moffat.

“That was a messy weekend and I didn’t get to do any race laps, so we didn’t really know what we’d found.

“We were competitive in Abu Dhabi and we’ve obviously been able to roll around here and we were able to qualify well and race at the front.

“We need to find a little bit more speed, but it sort of feels like a result like this has been coming for a while – there’s just some things that haven’t gone our way.”

Moffat added that another strong qualifying performance will be vital if he is to repeat his competitive showing tomorrow.

“Around here, qualifying is very important,” he said.

“(But) given our car was definitely strong on the soft tyres, and with the longer race and the probability of running longer on softs, I think it will help us.

“No doubt, there’ll be a a lot of teams overnight trying and tune their cars up. We just need a little bit more and we might be able to challenge a little further up the grid.”

Moffat is expected to move to Kelly Racing’s Nissan outfit for the 2013 season following two years with DJR.

See below for Speedcafe.com’s V8 Race Guide at Winton Raceway.