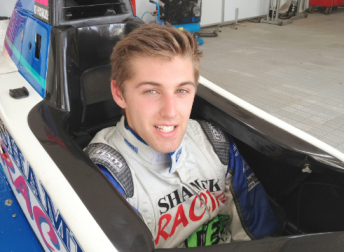 In only his fourth-ever national round, De Pasquale qualified on pole position and was able to drive away from the squabbling pack in the 10 lap race.

The result betters his previous top result, a pair of third places scored at the most recent round at Bathurst.

“It’s a great feeling to pick up my first win, especially in front of such a high quality field,” De Pasqaule said.

“We’ve been working very hard on the car recently, and it’s paying off.”I made a good start, which is important because it’s hard to pass around here, and I managed to hold on.

“Hopefully I can keep it up and score a few more wins by the end of the weekend.”

Mathew Hart came through for second position after a strong overtaking move early in the race on Jack Le Brocq.

Le Brocq, meanwhile, had to settle for fourth, after team-mate Macauley Jones was able to advance onto the podium late in the race.

Jones’s result was the best for the Rookie of the Year challenger since a third placing at Townsville in July, and came after topping both practice sessions.