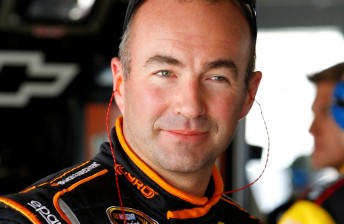 Marcos Ambrose will start on the front row at Homestead-Miami

Australia’s Marcos Ambrose will start the final race of the NASCAR Sprint Cup season from second place after qualifying for Ford EcoBoost 400 at Homestead-Miami Speedway.

“That was a really great lap for our Black & Decker Ford team. We’re excited to be so competitive and they brought a good car today. We just wanted to be somewhere in the top 10 to start Sunday’s race and have a good finish to our year.”

“I’m pretty pleased to be up front. We haven’t been great the last 10 weeks in qualifying, so it feels good to be up here, but I’ve got all the respect in the world for Brad Keselowski and all he does and what he stands for, so if I can be a friend to him on Sunday – I know I might have stolen the spotlight off of him in qualifying – but I’ll be his friend out there on Sunday.”