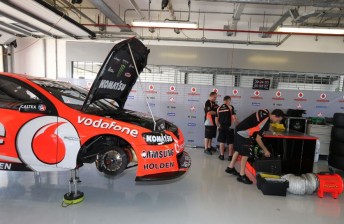 Jamie Whincup won’t have any new go-fast bits on his TeamVodafone Holden at Winton this weekend as he attempts to secure his fourth V8 Supercars Championship title.

Having pushed its engineering department harder than ever this season in order to fight off a determined challenge from Ford Performance Racing, the Queensland based squad has now turned its full development attention towards its Car of the Future program.

According to TeamVodafone team principal Roland Dane, who has led his squad to three Drivers’ Championships and five Bathurst victories over the last seven years, arriving at a race meeting without new parts to try is an unusual situation for the team.

“We’ve been developing the cars all the way through until Abu Dhabi,” he told Speedcafe.com prior to this morning’s opening practice.

“This race meeting is the first time in my memory that we’ve only had one or two things on the cars that are different from the last race meeting.

“Those items are really just (reliability) tidy ups anyway, so this is the first race meeting for years that we haven’t had any developments on the cars.

“We’re topped out pretty much with what we can do anyway, but we say that every year and still manage to come up with something,” he added.

“The guys have done an exceptional job of trying to squeeze everything they can out of it during the season, and they’ve been backed up by the drivers giving their all to it.”

Whincup needs to outscore FPR’s Mark Winterbottom by just four points this weekend in order to secure the Drivers’ Championship, provided that third placed Craig Lowndes and fourth placed Will Davison gain no more than 89 and 281 points on the reigning champion respectively.

While the Teams’ Championship will also be wrapped up if the squad can add 63 points to its current 513 point margin over FPR, Dane says his crew aren’t getting ahead of themselves.

“They’ll just do what they always do,” he said.

“As far as I’m concerned in terms of the main series there are four prizes to win each year – the Manufacturers’ Award, Bathurst, the Teams’ Championship and the Drivers’ Championship.

“Clearly two of those are done and we’re trying our hardest to secure the other two but nothing is done until it’s done. If you take it for granted you’ll probably fall over.”