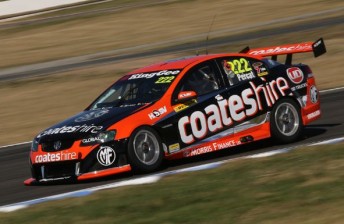 Nick Percat has recorded the quickest time in the second and final practice session for the Dunlop Series at Winton prior to Saturday’s all-important qualifying session.

The Walkinshaw Racing Holden driver recorded a 1:24.97s best on his 17th and final lap of the 40 minute hit-out.

Ash Walsh joined Percat in setting his fastest time on his final attempt to secure third fastest ahead of points leader Chaz Mostert.

The Ford Performance Racing pilot had spent much of the session on top before being relegated in the final 10 minutes.

Scott McLaughlin and Scott Pye, both title rivals to Mostert and Percat ahead of the final two rounds, were 12th and 13th respectively.