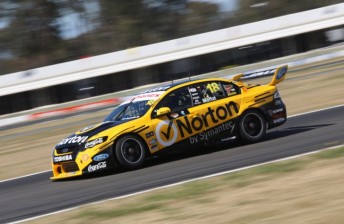 Dick Johnson Racing’s James Moffat has set the pace in the first of four practice sessions for the V8 Supercars Championship at Winton Motor Raceway today.

Fresh from scoring season best qualifying and race performances last time out in Abu Dhabi, Moffat recorded a 1:23.96s lap of the Winton circuit on his first of three runs in Practice 1 to monopolise the top spot.

Moffat set the time on a fresh set of pre-marked soft tyres left over from his disastrous Armor All Gold Coast campaign last month.

The first two practice sessions are for drivers in the bottom 50 percent of the championship only before the full field takes to the track for Practice 3.

Alexandre Premat, whose car also had a shocking run on the Gold Coast, moved to second midway through the 30 minutes – lapping just 0.10s off the pace in his Garry Rogers Motorsport Holden.

Jonathon Webb, who set the Practice 1 pace in Abu Dhabi, languished at the bottom of the time sheets having been the only runner to not bolt on any soft compound Dunlop rubber.

Bright and sunny conditions have greeted teams at Winton this morning, with track temperatures set to sore to almost double that of the predicted 22 degree ambient maximum.