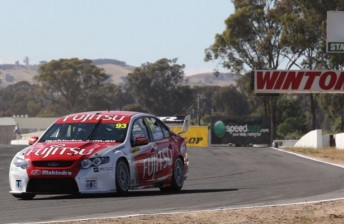 Fujitsu Racing’s Scott McLaughlin has fired the first shot in the Dunlop Series at Winton Raceway, setting the fastest time in the opening practice session.

Dale Wood was sixth, while Ash Walsh, competing in a latest specification Stone Brothers FG Falcon for the first time, was seventh but suffered from a broken front roll bar during the session.