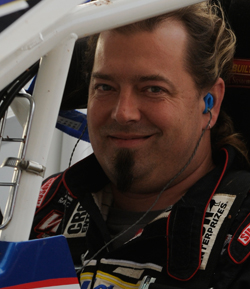 American Sprintcar star, Jason Sides will return to Australia to race a limited campaign at the height of the summer period at Sydney Speedway.

The campaign from the Bartlett, Tennessee racer will begin on December 29, which is the NSW Sprintcar Title, which doubles as the historic 1000th event at Sydney Speedway.

He returns for the January 1, 4 and 5 Sydney Speedweek events and will add plenty of cream to the World Series Sprintcars crop when it makes its return to Sydney across the weekend of January 18 and 19.

Sides, who took one World of Outlaws victory throughout 2012, has become popular among local fans after his previous visits to Australia. He’ll join fellow Americans Joey Saldana and Rico Abreu in taking on some of Australia’s best at the 460 metre Granville clayway.

Sydney Speedway has announced a ‘Fan Appreciation Night’ on December 28 at the Mercure Hotel, Parramatta where fans can rub shoulders with the likes of Sides and raise money for the Westmead Children’s Hospital.