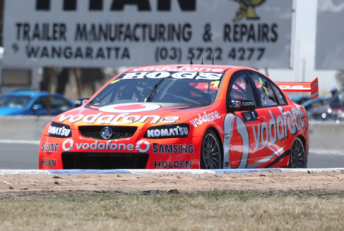 Jamie Whincup has set the fastest time of the day to top the fourth and final practice session for the V8 Supercars at Winton Motor Raceway.

The TeamVodafone driver, who could secure his fourth V8 Supercars title tomorrow, clocked a 1:23.77s time on his first lap of the final 30 minute hit-out.

The effort put Whincup as much as 0.8s clear of the field and would prove unbeatable, with even the man himself falling short after going fastest to the first sector on his final attempt.

The Hiflex Ford driver was one of several drivers to enjoy a healthy bank of pre-marked soft tyres to practice on today having missed the majority of the Gold Coast meeting late last month due to a start-line accident.

Whincup’s team-mate Craig Lowndes was surprisingly off the pace, ending the session almost a full second adrift of the pace-setter in 20th.

The V8 Supercars will return to the track for qualifying tomorrow ahead of Race 27.