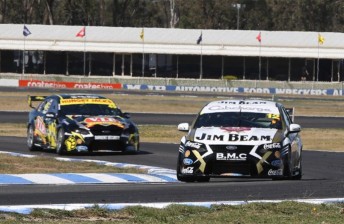 Dean Fiore has shown the way in the penultimate V8 Supercars practice session of the day at Winton Motor Raceway.

The Dick Johnson Racing Ford driver set a 1:24.01s on just his third lap of the 30 minute session that proved unbeatable.

Alexandre Premat, whose Garry Rogers Motorsport team tests at the rural Victorian circuit, repeated his effort from both Practice 1 and 2 by clocking the second fastest time.

Jason Bright ran just six laps in the first full-field hit-out of the day for third ahead of Jamie Whincup, James Moffat and Craig Lowndes.

The TeamVodafone duo both concentrated on long runs rather than outright speed, completing unbroken 15 and 16 lap spells respectively following the green flag. Lowndes’ run eventually ended with a trip through the grass at Turn 7.

David Reynolds also had an early off in the form of a wild spin at the exit of Turn 10 on his way to seventh fastest.

It was an even tougher outing for Kelly Racing, with Greg Murphy, Rick Kelly and Tim Blanchard filling the bottom three places on the time sheet.

Murphy has been struggling for front-end balance under brakes since the start of the first session this morning, while Kelly noted that his car had “turn-in oversteer and then massive understeer” at the end of his final Practice 3 run.

The fourth and final session of the day is scheduled to get underway at 1500 local time.