Dani Sordo heads back to Citroen

Dani Sordo heads back to Citroen 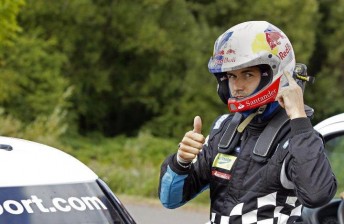 Dani Sordo pleased to be confirmed at Citroen in 2013

Spaniard Dani Sordo has been confirmed as the second factory Citroen driver in the 2013 World Rally Championship.

With nine-time world champion Sebastien Loeb cutting back to a part-time programme next year, the all-conquering Citroen squad had to find a second fulltime driver to partner Mikko Hirvonen, for Sordo it’s a return to the same roll in the same team he occupied between 2005-2010.

Since that time Sordo had been part of the Prodrive-run Mini squad developing the Countryman and then contesting WRC events. However, Mini pulled back its major funding of the programme leaving Sordo with a limited program and despite three podiums in just 13 outings he was always hampered by not only the lack of events but also testing and development.

“Obviously I am very pleased to rejoin a team with which I share so many good memories,” said Sordo.

“This was my number one choice for 2013. The last few years have been good for me. In another team [Prodrive WRC Team] I got to grips with different working methods. I took on more responsibility in the car development process.

“I see this return to Citroen as a great opportunity. I am still looking for my first win in WRC and I am determined to secure it next season! I can’t wait to see the people I know again and get back behind the wheel of the DS3 WRC, in which I did some testing at the end of 2010.”

In what was a two-way battle between Sordo and fast Norwegian Mads Ostberg, Citroen team principal Yves Matton admitted it was Sordo’s six fastest times on last week’s Rally of Spain which convinced him – along with his nationality, which appeals to Citroen’s Spanish-speaking markets.

“We took our time in assessing the potential of the drivers available to line-up alongside Mikko Hirvonen next season,” said Matton.

“Obviously, Dani was very high on our list and his performances at the Rally of Spain proved that he can still perform at the very highest level.

“Dani is very well liked in the team and it’s a pleasure for everybody to see him return to the family. His profile compliments Mikko’s in many aspect and it was important for Citroen to have a Latin driver for the southern Europe and Latin-American markets.”