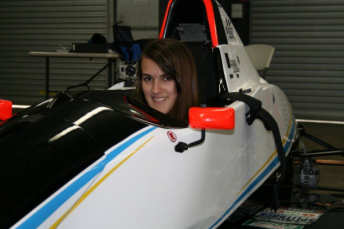 Victorian youngster Chelsea Angelo will step up to make her national debut this year, combined with another full season in the Victorian State Championship.

Angelo will be joined by Liam McAdam, who will also make his maiden start in the national series.

The pair have competed for the Evans team in Victorian State racing this year.

Team owner Evans, who recently completed a merging of his team with Dunlop Series team Greg Murphy Racing, confirmed that Angelo and McAdam would make starts in selected rounds of the national championship.

“Chelsea and Liam have done a great job this year and will continue with us in 2013,” Evans said.

“They will both run the full Victorian Championship and a few rounds in the National Championship.

“There’s one more spot left in the program for next year and we’re looking at drivers for that position at the moment,” he said.

Evans says he has been pleased with the level of interest the new merged V8/Formula Ford team has created.

“We’ve had a great response from potential drivers in both our Dunlop Series cars and in the ‘Young Guns’ Formula Ford program which we run,” he said.

“That interest in the career pathway that we have developed through the merger with GMR is exactly what we wanted to achieve and I’m really pleased with the interest that is being shown.”