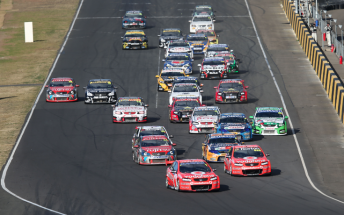 V8 Supercars’ commercial management team is confident a number of significant sponsorship announcements will go some way to replacing the dollars that will leave the sport at the end of this season.

V8 Supercars director of commercial and marketing John Dunlop says that a number of large new deals, to be announced over the next few weeks, will replace the likes of Telstra, who confirmed that it was opting out of the sport.

“In the coming weeks, V8 Supercars will be making several announcements and bringing on even more new partners for 2013 and beyond,” Dunlop told Sponsorshipnews.com.au.

Dunlop said that the high level of sponsor turnover was “just part of the normal process of renewing contracts, (with) sponsors looking to refresh their portfolios.”

He also confirmed that one was a major sponsor that was new to motor racing.

While the V8 Supercars company is searching for backers, so are its teams. Last Friday, Jim Beam announced its departure as major sponsor of the Dick Johnson Racing team, and this followed the loss of Vodafone (Triple Eight), Lucky 7 (Stone Brothers Racing) and Trading Post and Orrcon Steel (Ford Performance Racing).

Jim Beam and Orrcon Steel will remain in the sport, continuing with DJR and FPR respectively at a lower level. Jim Beam will also remain as the ‘Official Spirit’ of the V8 Supercars Championship.

As far company’s joining or renewing their deals with teams, Red Bull will enter the sport next year with champion team Triple Eight, while Jack Daniel’s confirmed last month that it has signed a new multi-year deal with Kelly Racing.