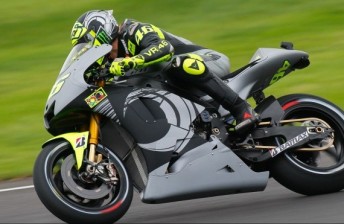 Valentino Rossi back on a Yamaha

The much anticipated return of Valentino Rossi to to Yamaha and the debut of Marc Marquez with Honda has been upstaged by poor weather during the opening day of testing Valencia in Spain.

Rain and cold temperatures ruined any chances of fast times with Rossi undertaking a few shakedown laps on the Yamaha in the morning, but did not head out for fast laps until the rain had arrived.

After two winless seasons with Ducati, the Italian has rejoined the Japanese squad at which he spent seven years, winning four premier class titles and 46 grands prix along the way.

Rossi completed a total of 28 laps, but the team has decided to take the Italian and his 2013 M1 Yamaha to anticipated better weather at the Aragon circuit which is hosting a World Superbike test.

At least Rossi got some track time with his teammate and world champion Jorge Lorenzo staying dry in the garage, while Honda deciding not to run Casey Stoner’s replacement Marquez in the poor conditions. In fact Honda also kept Dani Pedrosa off the track, as did tech3 Yamaha who also didn’t run Cal Crutchlow and new boy Bradley Smith.

“It’s better to be patient and wait as it’s important to test the bike in the best conditions possible,” said Marquez.

“I know the power will be very different and also the electronic controls, also the carbon brakes and tyres will be something I need to adapt to, but step by step we will learn. I’m really excited to get started but we we agree that it’s best to test the bike in the dry for the first time, I just hope the weather will improve tomorrow!”

Fastest on the day was Honda Gresini’s Alvaro Bautista who made the most of a dry but cold track.