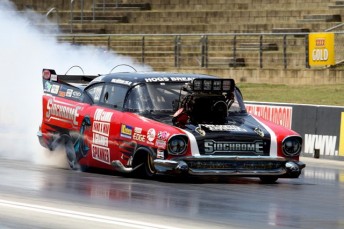 Australian drag racing icon, Victor Bray has called for the Australian National Drag Racing Association (ANDRA) to re-think its approach around professional level events ahead of this weekend’s Goldenstates at the Perth Motorplex.

This weekend a huge field of 19 of the crowd pleasing Doorslammers will attempt to qualify for just eight positions in the race day field. Despite Top Doorslammer attracting similar numbers over recent seasons, for varying reasons, organisers have been reticent to mandate a 16 car field.

Although calling for a re-think, Bray isn’t sure the 16 car field is the answer.

“What I would like to see is an approach which sees a comparable show for both days of an event, providing the fans with the spectacle they want and rewarding the drivers and teams for their efforts.”

Bray will be hoping he can make the field in Perth, where he set a world record speed in 2003. He believes the current format placing so many cars on the sidelines has a universally negative effect on all stakeholders.

“There has been talk of introducing 16 car race fields in situations such as this, I am not sure if that is the answer but I definitely think it is time that we sit back and have a look at a new approach for the benefit of the racers, the track promoters and the fans.”

The Perth Motorplex have been proactive in attempting to deliver more value to racers and spectators for their upcoming Top Fuel events – the first one which will be at the end of this month. The format sees the Top Fuel dragsters seeded into groups with additional racing for each driver and the fastest competitors making it into the final. The following day, the format is repeated to deliver two events on the same weekend.

“Perhaps something like the format run in the recent (Top Doorslammer) Slamfest series or the two (race) idea employed by V8 Supercars at some of their events could be a starting point for a new approach,” Bray added. “It works over multiple days, keeps the schedule nice and tight, and provides the show we are all looking for.”

Such is the competitiveness of Doorslammer at the moment,  defending Champion, John Zappia found himself as a non-qualifier two weeks ago in Sydney, it has also cost crowd favourite Bray a race day start on several occasions over recent seasons.

Zappia will be aiming to strike back in the far more familiar surrounds of the Perth Motorplex, however the momentum that Sydney winner, Peter Kapiris holds will be hard to rein in.

Doing double duty across both feature categories, Queenslander John Cannuli is set for a busy weekend, whilst Zappia will be joined by a host of West Australians that are regulars at the multi-million dollar Motorplex.

This Friday and Saturday’s event will see a healthy field of Top Alcohol join Top Doorslammer as the headliners for the event. Nine cars will roll out for qualifying with plenty of home town drivers to support. A lot of that support is expected for WA driver, Adam Marchant who returns to the wheel after urgent family matters forced his exit right on the eve of challenging for the 2011/2012 Championship.