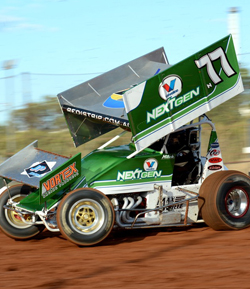 Mitchell Dumesny will be out of action for a while after his crash on Saturday night (PIC: Sydney Speedway)

Dumesny crashed in turn four during his opening heat race of the night and was then extricated by the Sydney Speedway crash crew under supervision from Ambulance NSW Officers.

In the accident, Dumesny – the son of multiple Australian Sprintcar Champion, Max Dumesny – suffered a back injury. It took some time to diagnose as being a cracked T4 vertebrae, which is located between his shoulder blades.

With a small fragment of his vertebrae approaching the spinal chord, but no neurological symptoms being shown, specialists decided that his convalescence should be through using a brace on his back for the next six weeks rather than undergo surgery.

“The Sydney Speedway crash crew took all due care in assessing the situation and worked under the direction of the Ambulance Service of NSW to extricate Mitchell from his car,” explained Sydney Speedway Manager, Rebecca Seymour. “Driver safety and care is always the number one priority of Sydney Speedway and we wish Mitchell a full and complete recovery.”

Garry Brazier took the race win at Sydney Speedway – his first for the season.

In another incident on Saturday night in Western Australia, Ben Migro – who’s family has been heavily involved in the WA speedway scene over the past decades – suffered a squashed vertebrae, severe bruising and a punctured lung after a wingless sprintcar accident at Collie Speedway. He too is currently making a full recovery after returning home yesterday.