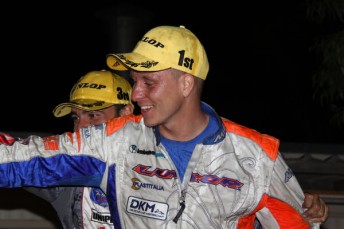 Fresh from winning the Kalgoorlie Case & Drill Dash for Cash event in Western Australia, Dutchman Joey Hanssen has revealed that he might soon call Australia home.

Hanssen, who drove for the Lenzo Kart Australia team in Saturday’s event, made the revelation to Kalgoorlie’s GWN7 News during an interview on Monday.

“I think it’s more friendly here (in Australia), it’s easy going and all of the people don’t try to cheat all of the time, in Europe it’s just my job and here the racing seems to be more fun,” Hanssen told GWN7 News.

The 2011 KZ2 World Cup Champion indicated that he is seriously considering a permanent move to Australia.

“It all depends about next year and what I’m going to do, if I was here in Australia I’d race the CIK Stars of Karting Series but if I stay in Europe I’d be racing in the World Championship,” said Hanssen.

Having competed at the highest level of karting before also trying his hand in the Canadian Tire NASCAR Series, the 21 year-old believes karting is where his heart lies.

Hanssen plans to spend this week sightseeing in Australia before heading back to his European base next weekend.

To view Hanssen’s interview with GWN7 following his win in the Dash for Cash please click here.